CHALLENGE The need was to create a logo and can design for their new hazy IPA, “Las Hermanas”. The logo and can design needed to include rich Mexican culture elements, expressing the idea of an all woman international collaborative brew project without borders. The overall design should also convey the bright tropical notes in this hazy IPA. 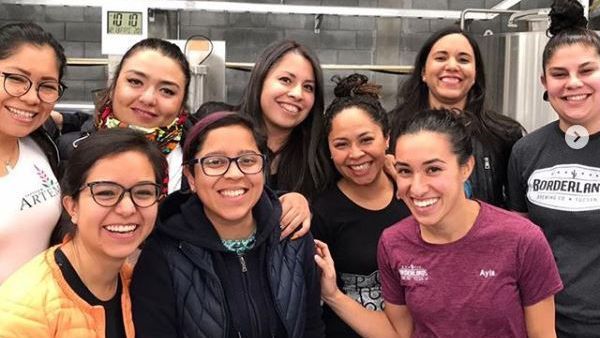 The women brewers of Borderlands Brewing have collaborated with women brewers from Mexico at Cerveza Rrey to create a first of it’s kind international brewing event, the “Las Hermanas Brewing Project”. The project is about building relationships across borders, highlighting woman brewers, and of course celebrating craft beer. It was brewed in Mexico first, then in Tucson 1 week later to allow brewers from both sides to attend both brews.

The design elements and contrast of the bright colors on a black background creates visual appeal, legibility, and gives the design a bit of a tropical feel to fit with the beer’s taste profile.

The initial application was for the beer can label, but consideration was made for a wide variety of uses. The "Lady in the Hops" detail provides another visual element associated with the brand.

RESULTS  The beer was a hit! Las Hermanas is the fastest selling beer that Borderlands has ever released.  The opening release night had lines out the door and they sold out of draft quickly (4x faster than past releases for new beers). There was ample media coverage with 3 television interviews as well. They also made t-shirts with "The Lady in the Hops" that sold out in one weekend.

Borderlands is donating proceeds of the beer to develop a technical brewing conference in Mexico since there are currently no such events in Mexico.

Cirrus is proud to be a part of this multi-cultural collaboration!